The Islamic world and Africa 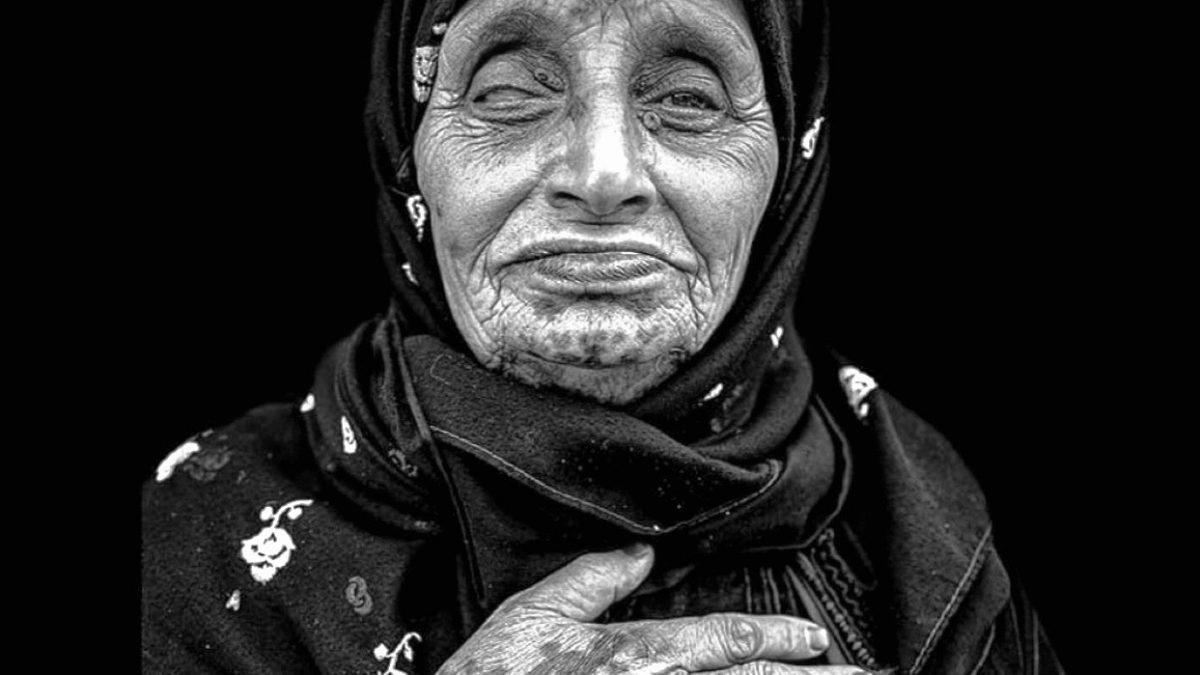 Dear readers, I bet you did not expect another text so soon. The thing is that Africa and the Islamic world are geographically a lot closer to us than Polynesia/Micronesia/Melanesia (I’m still waiting for the answer to the question from the previous post) or the Far East, and therefore we were able to visit all those people, countries and tribes a lot faster. Jokes aside, there are multiple reasons, but none of them is particularly interesting nor fun. The most neutral reason would the fact that Africa is filled with African Americans (take that, political correctness lol) who’s skin colour is not suitable for tattoos because of the low contrast. Scarification, on the other hand (or on both hands), is by far the most popular form of body modification in Africa. But then again, it is not our subject.

As for the Islamic world, namely North Africa, Middle East and Arabian Peninsula, it is common knowledge that they are rather strict when it comes to body modifications, and therefore the tattoos are forbidden/undesirable. And those are the reasons why we will not immerse deeply into the Red sea (because, you know, it splits Arabian Peninsula and Africa) of stories about tattoos in these two worlds. And to keep pushing this poor analogy, we will still turn some rocks on the coast and most certainly find some interesting discoveries.

Let us start with the Islamic world. The area of Islamic influence is huge, from Indonesia through India up to North Africa, but we must also emphasises that this is not a generalisation nor claim that everywhere is the same. I mean, we already saw how they treat tattoos in Indonesia in the previous post. However, Islam has been present for a very long time on majority of the named areas and the Islamic values pushed out the traditional beliefs and customs. Of course, there are some tribes who kept some fragment of the old customs and traditions or they merged them with new and dominant tendencies into some sort of cultural hybrid; a common example of diffusionist theory in ethnology. For example, many Muslim countries have traditional peoples or tribes who still use tattoos, and late Saddam Hussein is the best example:

“He has a tattoo on his right hand, three dark-blue dots in a line near the wrist. These are given to village children when they are only five or six years old, a sign of their rural, tribal roots. Girls are often marked on their chins, forehead, or cheeks (as was Saddam's mother). For those who, like Saddam, move to the cities and come up in life, the tattoos are a sign of humble origin, and some later have them removed, or fade them with bleach until they almost disappear.”

Besides Iraq, tattoos are present in Afghanistan, Morocco, Algeria and Egypt. A strong underground movement has been recorded in Iran where women would get tattoos. Women of the Berber tribe in North Africa often tattoo small symbols on their wrists. Traditional Tunisian designs include eagles who represent power, as well as designs placed on hand in order to protect it from sprain, and fertility symbols such as the sun, moon, and stars.

As stated in the introduction, tattoos are not only frowned upon in the Islamic world, but in some more fundamentally oriented countries they can seriously jeopardise a person’s life, since people with tattoos are considered to be non-Muslim. But to be fair, none of the monotheistic religions takes tattoos too kindly.
The most popular form of body modification in the Islamic world is circumcision, female genital mutilation (female circumcision) and henna. I would like to refer to female genital mutilation because I just cannot wrap my mind around it. In strict Christian and Muslim societies women are second class citizens, which is not OK either way, but we can take it as an axiom for the following argument. Also, we will not criticize cultural practice no matter how “wrong” it may seem because that would be a form of colonial narrative, if not worse. But what I really do not understand is the biological aspect of FGM. Basically, clitoris is partially or completely removed (clitoridectomy), sometimes along with labia minor, and then labia major is sewn together (infibulation).

Official narrative stated that in this way female sexuality, which can be dangerous in the Islamic world, is put under control, and also to ensure purity and fidelity of wives and daughters. The procedure is performed on girls usually aged 4 to 8, and often results in the elimination of sexual pleasure, as well as scars, infections and pain. That being said, can someone please explain to me, I admit I am stupid and ignorant, but how is it possible for such a woman to have a child? I really don’t get it, you mutilate your wife/daughter in order to keep them pure and faithful, but how do you get offspring? This is a huge problem and the initiative to stop that practice has been launched with the UN, UNICEF, UNIFEM, WHO, and even with private organisations such as Amnesty International.

Ancient Egyptians enjoyed decorating themselves which is very well documented thanks to archaeological findings. They did it all – make up, henna, wigs and hairstyles, jewellery, scarification, and tattoos, and even the punitive branding. Tattoos were firstly reserved for women and for decorative purposes, although there are some hints of ritual use of tattoos and tattooing. The practice was most probably adapted from Nubians during the Middle Kingdom (2040. – 1728. BC) which is in correspondence with discovered tattooed mummies estimated to be 4000 years old. First discovered and most famous is Amunet, Priestess of Hathor. She has parallel lines made from dots and dashes on her hands and thighs, as well as an oval pattern on the belly area. (image 1) 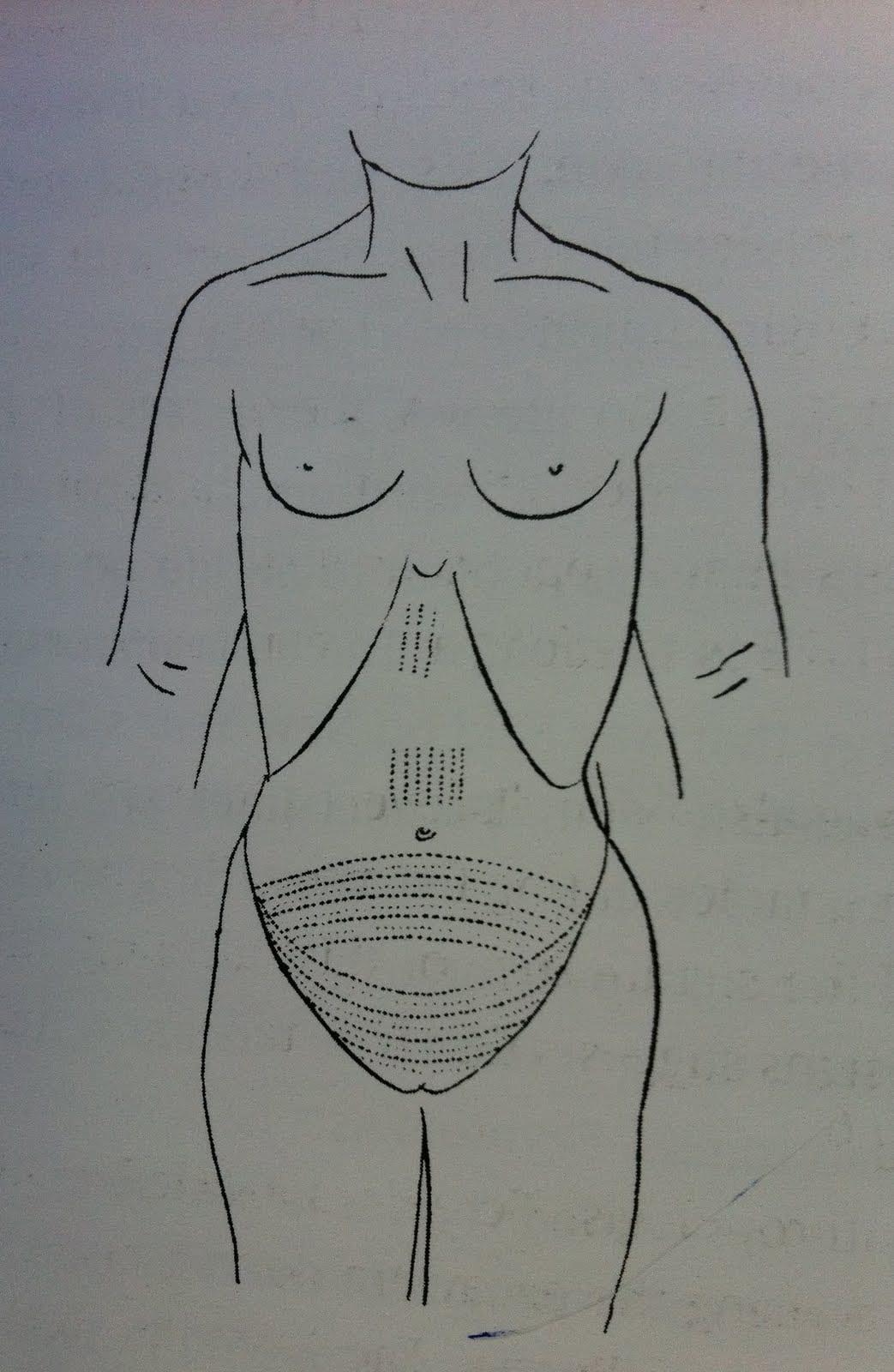 It is believed that belly tattoos are related to sexuality and fertility. By the New Kingdom period (16th century BE – 11th century BE) tattoos were greatly improved, especially images of the goddess Bastet, usually located on women’s thighs. And what do you think, how was this goddess represented? … Exactly, in the form of a cat. Before people did not have cameras so they had to tattoo their cats.
Awesome! (image 2).

Today, Coptic Christians living in Egypt continue to wear Coptic tattoos as a sign of their faith, the most prominent being a cross on the forehead.

The earliest evidence regarding tattoos comes from the Nubians; tattoos were found on two mummies over 5000 years old. “Gebelein Man A” has depictions of wild bulls and sheep, and the figures on “Gebelein Woman” are an S-shaped motif and a crooked stave, throw-stick, or baton. It is interesting that this finding threw a shadow of doubt on previously stated interpretation that the tattoos were primarily reserved for women as a sign of fertility. Famous Egyptologist Reneé Friedman suggest that wild bull represents male potency in ancient Egypt. He also suggest that the tattoos on “Gebelein Woman” could represent ceremonial or ritualistic motifs.

As for the technical aspect, bronze needles, fish bones and acacia thorns were used most often. Needles were dipped in the pigment, while fish bones and thorns tore the skin open and then the soot was rubbed in the wounds. In the area around today’s city of Aksha in Sudan, two mummies were found with interesting and never fully deciphered designs (image 3).

It is believed that the first design represents already mentioned Bastet. The second one is unidentified, but it is believed it represents a plant or flying birds. Plants represent fertility, regeneration and life in ancient Egypt and it is entirely possible that the interpretation originates from the Nubians. Third row allegedly represents a row of ostriches. They also used geometric tattoos (image 4), 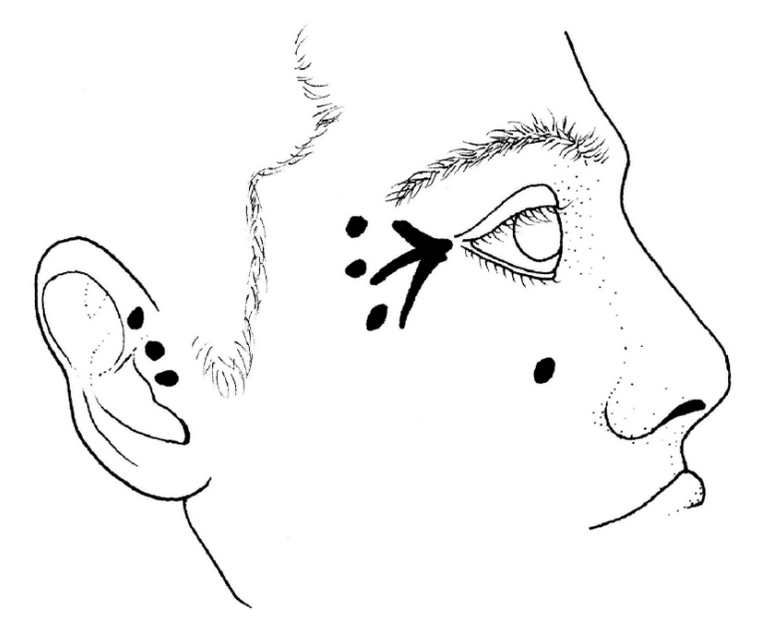 like the Man from Aksha. There are no precise and definite interpretations – it is possible they represented group affiliation, significant life events, beautification or even medicinal purposes (possible eye issues). Most dominant were dotted tattoos in the shape of rhombus or zigzag lines.

As for the rest of Africa, there is nothing. Nada. None. Zip! I could write about scarification for two more days, but there is nothing on the traditional tattoos. What we do have are contemporary African motifs, for example a native person with shield and spear – a very common motif for the Zulu culture. Of course, there are a lot of tribals, African animals and many other motifs, but not in the form of traditional tattoo.
For our next trip, we will go into the neighbourhood, so to speak. We will look into traditional European tattoos, from ancient Greeks and Romans, thought Celts all the way to Russians. After that we embark to Americas – American natives (PC again), Mayas, Aztecs, Incas and even Inuit as a cherry on top. See ya soon! 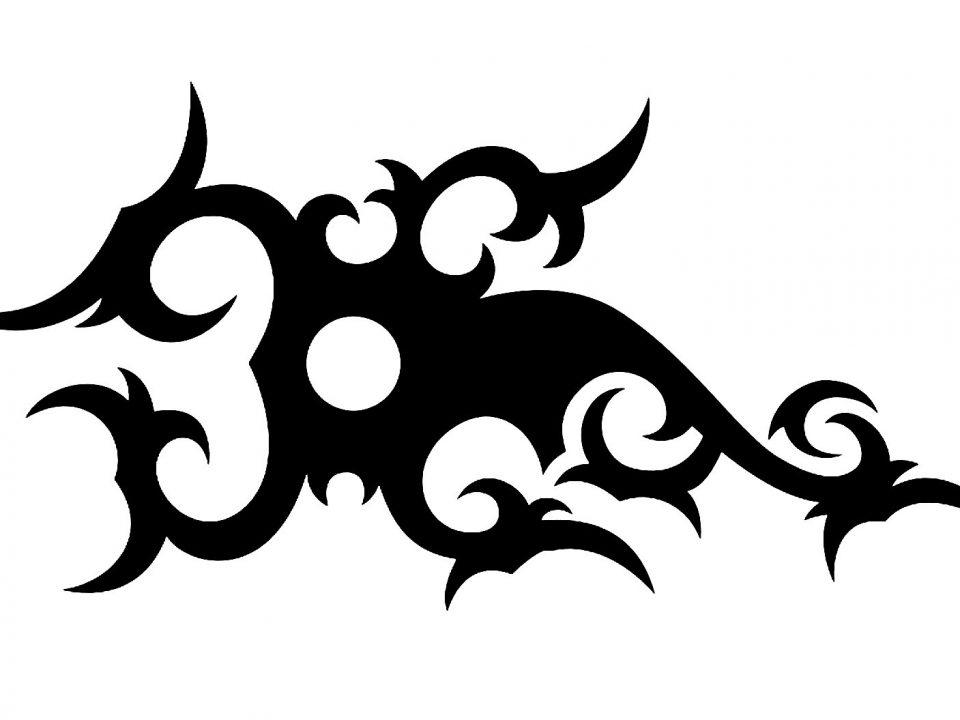 Traditional tattoos III: „A man without tattoos is invisible to the gods“– India and South East Asia 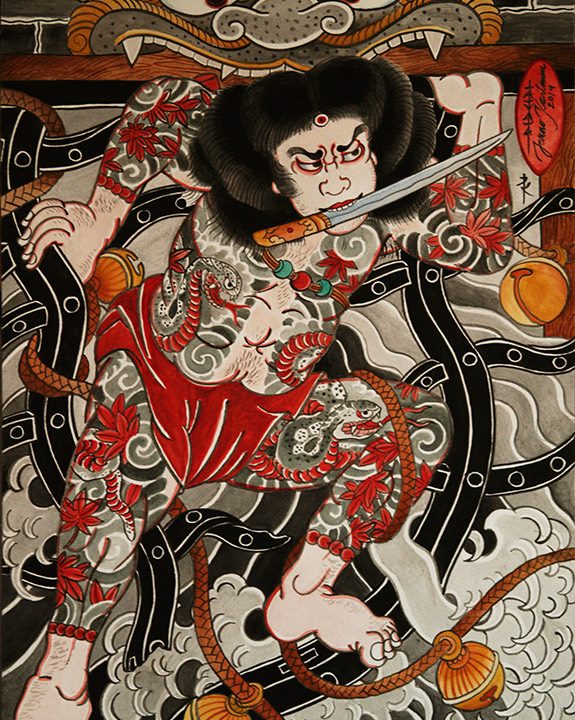 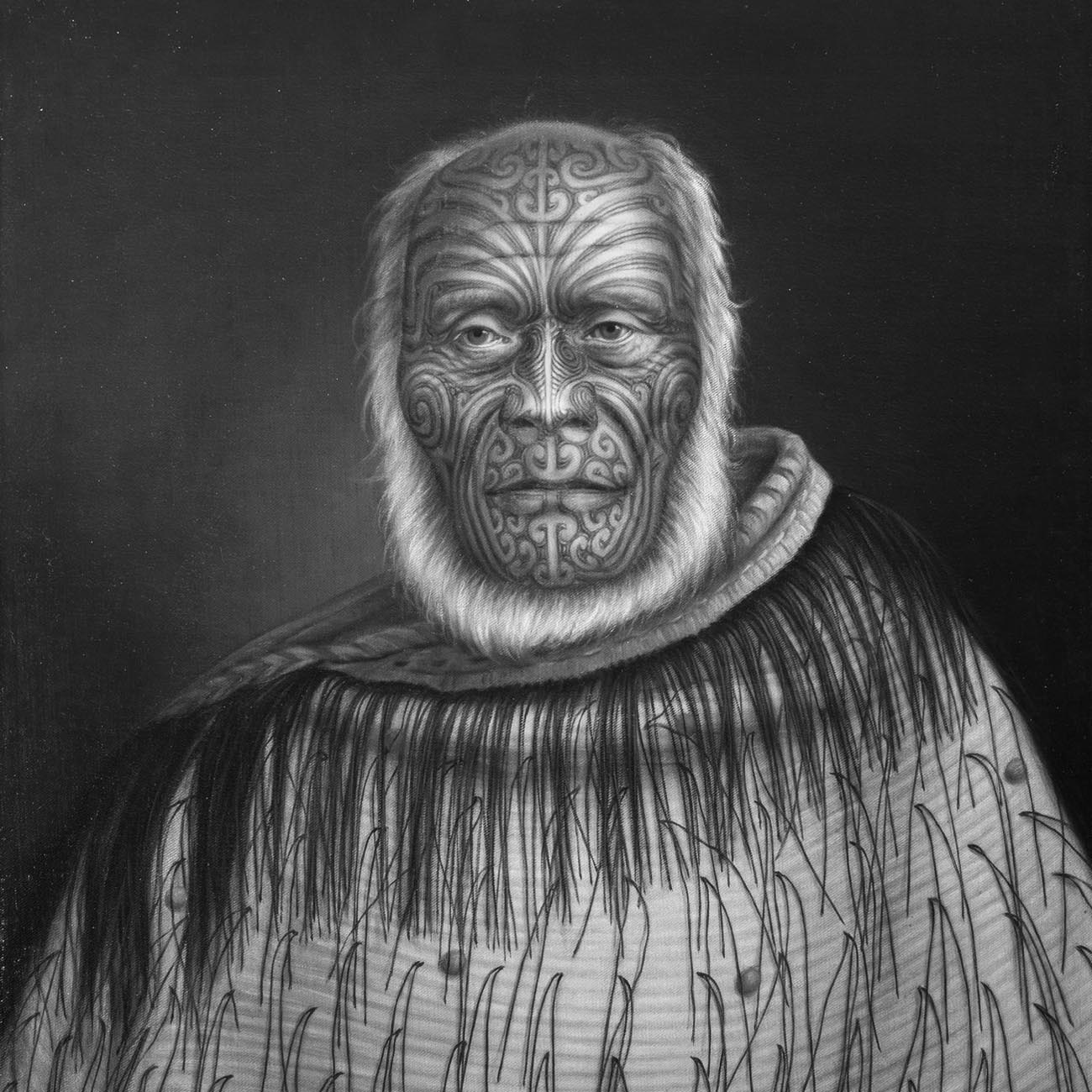